Lough Swilly – the Lake of Shadows, the Lake of the Eyes – Buncrana, Inishowen, Donegal… I came to scatter my father’s ashes in his hometown in the Solstice of 2014. My father once took me to see Frank McGuinness’ play The Bread Man, which has a Donegal setting and is about McGuinness’ father. My father had the courage to go upto McGuinness at the Gate Theatre. His gambit was: “Hi Frank. We’re from the same town: Buncrana.” This had the two of them chinwagging for the rest of the interval. 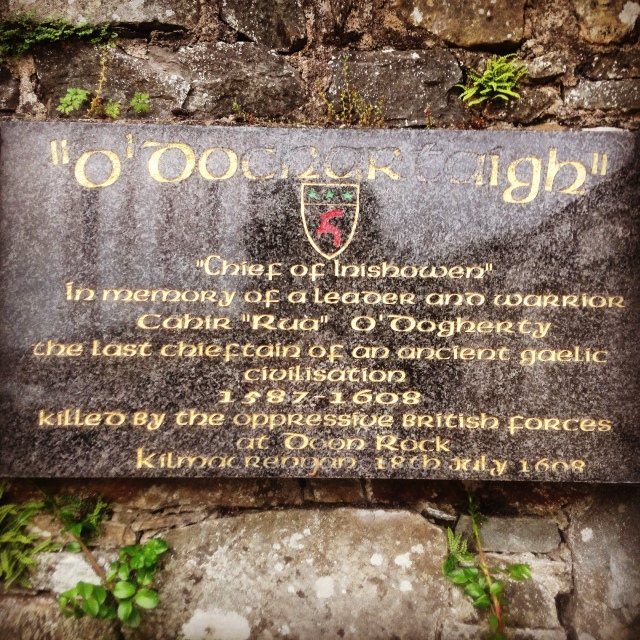 The McDevitts are an offshoot of the O’Dohertys. David O’Doherty – who died in 1208 – became a chieftain of Inishowen, and the new name was created: MacDaibhead, the Sons of David, a pinch of Irish-Israelitism that came in with the Normans. The McDevitts and O’Dohertys remained close… too close for comfort, perhaps. 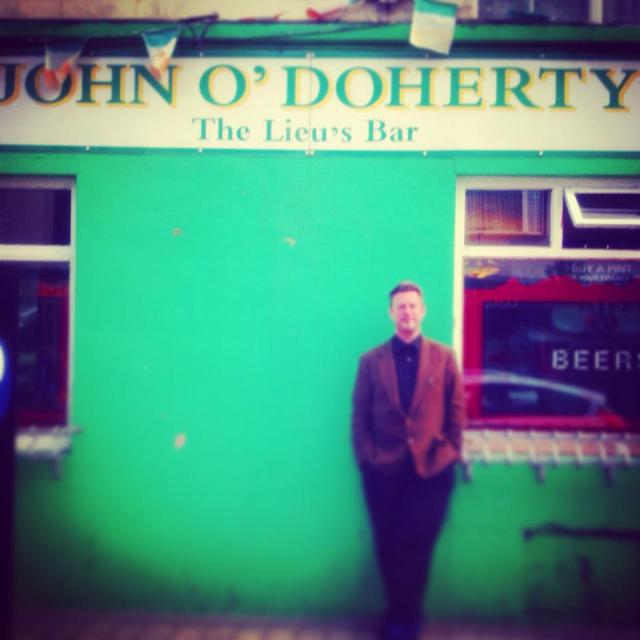 The two families’ heraldry is identical, three pentagrams, stag trippant, though the vizors and bunting may vary. 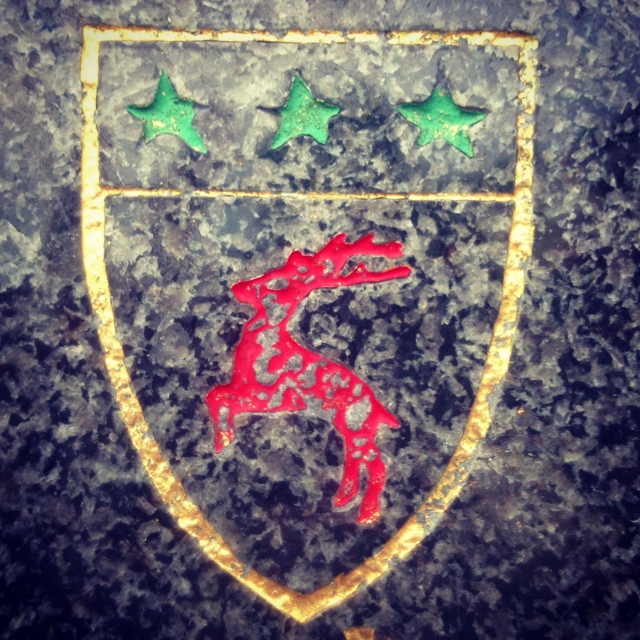 Four hundred years after the death of David, the O’Dohertys and McDevitts were still in cahoots, plotting against the English from their headquarters in Buncrana. Their uprising was just after the Flight of the Earls and the Ulster Plantation, but is much less well-known. I took my father’s ashes to Cahir O’Doherty’s Keep to see if any hospitality was on offer. Cahir had been fostered by McDevitts and his fellow rebels included Phelim McDevitt, Hugh Boy McDevitt, Shane McDevitt and Eamonn McDevitt. The McDevitts had Spanish connections. A Spanish chronicler noted that the Inishowen McDevitts lived on milk, raw beef and whiskey. 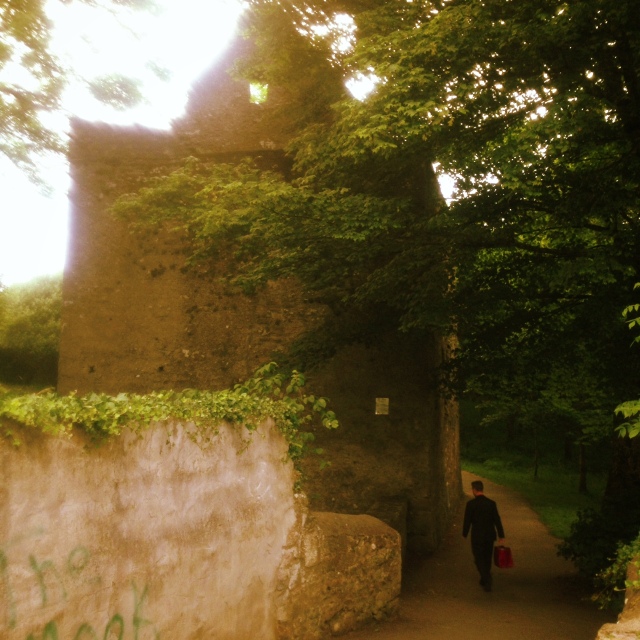 The Keep is what survives of a Norman Castle. The first two levels are from the 1330s. In 1602 Hugh Boy McDevitt added a floor for Cahir, who was a towering 6 foot four inches.
They were planning to use the Keep as a military base and were  looking for Spanish aid. According to one historian: “On the morning that Cahir led his army into Derry in 1608, the Clann Daibhead were in the vanguard. They were credited with setting fire to the wooden buildings there. This led to the burning of the city and much inconvenience for the English and Scottish planters resident there.” McDevitts later became known to planters – pejoratively – as ‘Derryburners’ or ‘burnderries’; though there have been a couple of Bishop McDevitts who served in Derry since.

I placed my father’s photo on one of the windows, with a red rose-bud, and began the scattering. It was the hour before dusk, the ‘magic hour’. I scattered the ashes through several portals.

This window I couldn’t reach. 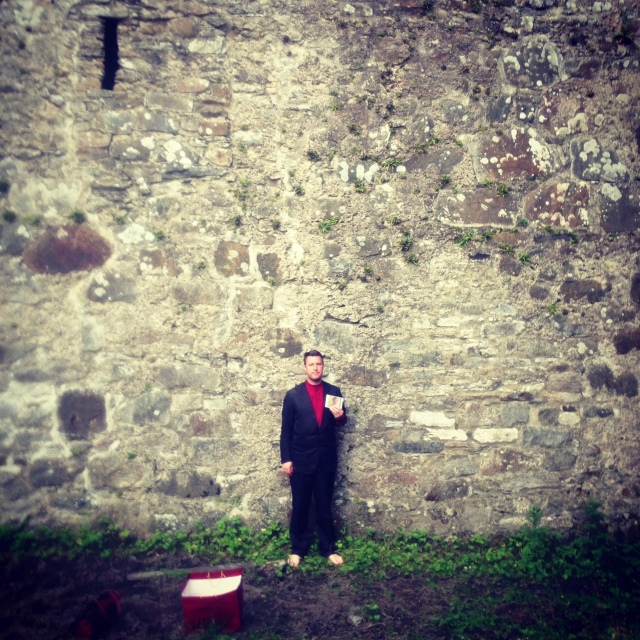 The fort is sealed off. Another window offered a tantalising view of the interior. It seemed a safe place to bestow the ashes of a family member, very clean and clear inside.

At the side of the fort was a gateway which led down to the the River Crana.

This is the six-arched Castle Bridge where the river is quite grassy and boggy.

The river is very beautiful in full spate.

Here, I am scattering from the bridge into the river. 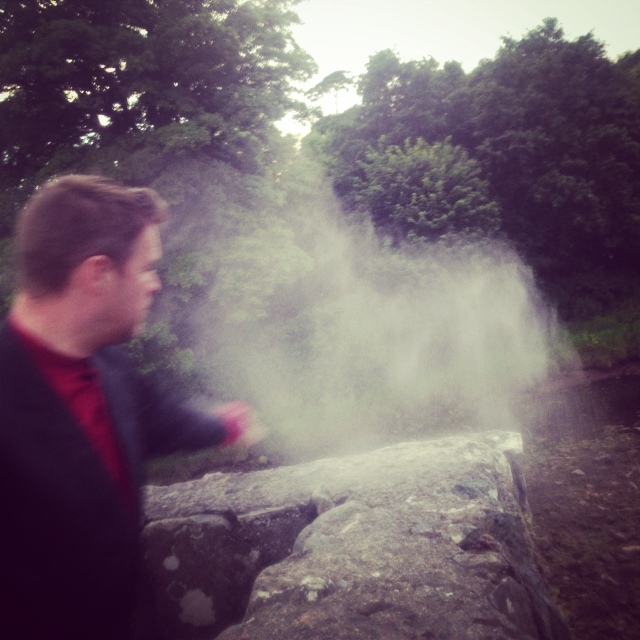 This is a historic path because it was the first track to lead into Buncrana. Many McDevitts must have trod it going in and out of the town. Buncrana was then based around the defensive tower of the Keep and was north of the river. The town later developed south of the river. 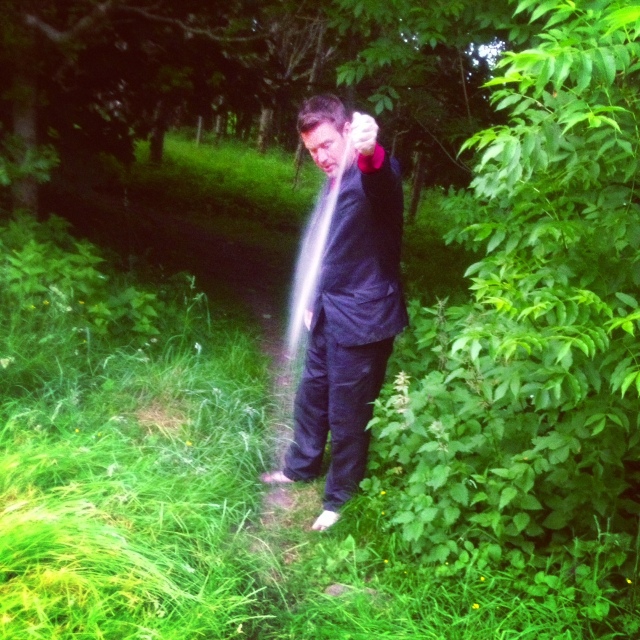 This wall is the oldest part of the ancient site. What remains is small. Most of the original wall was used to build Buncrana Castle.

This stone commemorates the O’Dohertys. 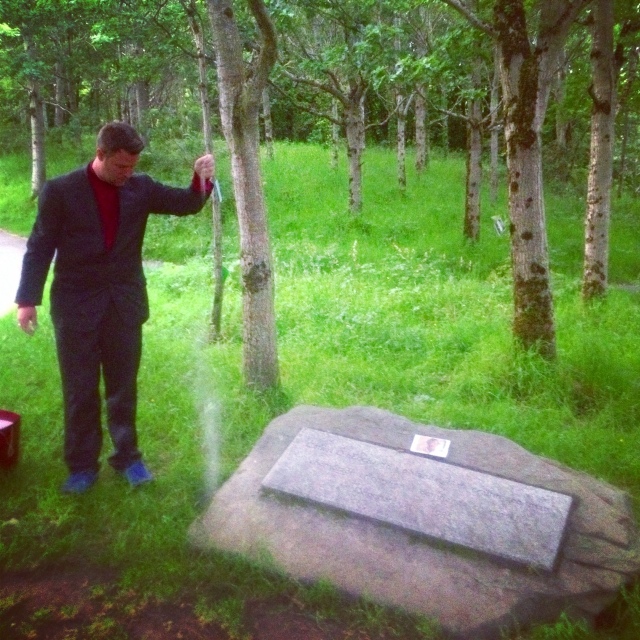 This is Buncrana Castle but is nothing to do with McDevitts or O’Dohertys. It was built in 1718 by George Vaughan who also built the Castle Bridge and Buncrana Main Street. It is where Wolfe Tone was kept prisoner for a night after he’d been captured on Lough Swilly. Today it is privately owned and not open to the public. 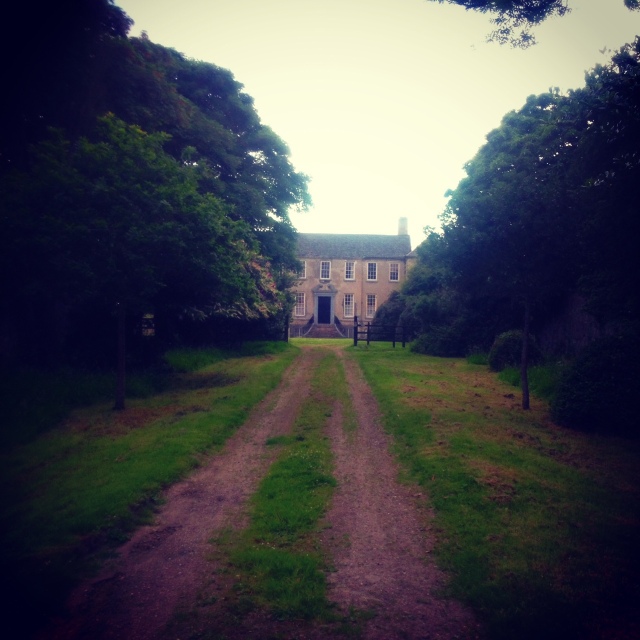 On the ‘Lake of Shadows’ anything can happen. A wild lily… 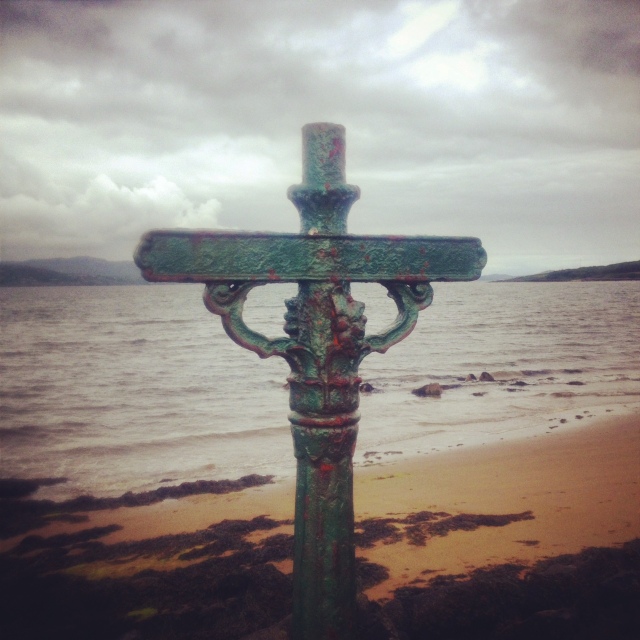 I wrote my father’s name in the sand.

And completed the scattering.

The following day I went to St Marys Catholic Church in nearby Cockhill to see if there were any McDevitts in the graveyard. The main church in Buncrana is Church of Ireland. The Catholics were shoved out of town by the British authorities who overlorded the area for centuries until the advent of the Irish Free State, even using Buncrana and Lough Swilly as a naval base during WW1.

McDevitts are rare enough. The McDaid anglicisation of the name is more common. There were many McDaid graves, but only three McDevitt graves. There is a 50% chance of any McDevitt being a blood relative of any other. I don’t know if Patrick or Mary McDevitt are relatives. 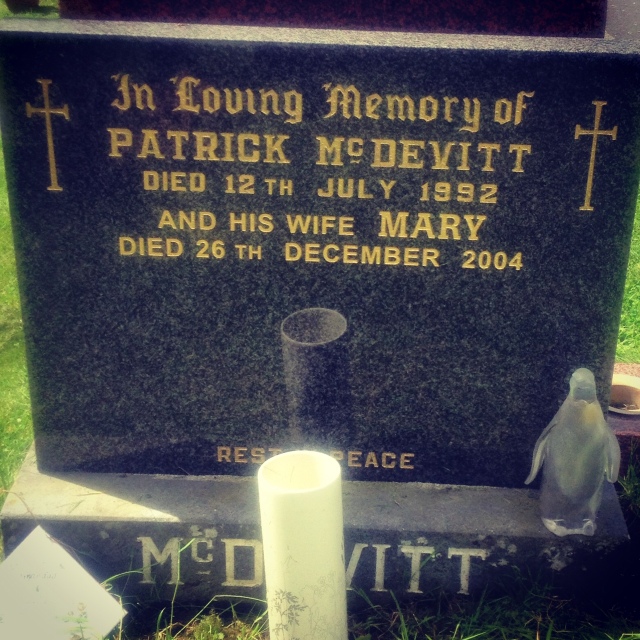 Nor I am aware of any connection with Annie McDevitt, who seems to have worked in the Emporium on Lower Main Street, or her nephew James McDevitt who is from New York. 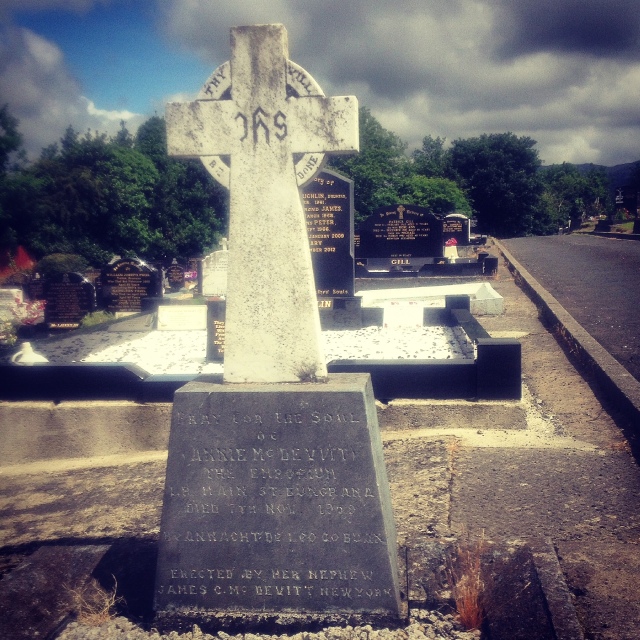 However, the most astonishing moment was yet to come. One McDevitt was not listed on the cemetary index. Staff working in the grounds told me about an unusual grave. It had been unmarked until about 25 years ago, when a hand-made wooden cross appeared.

Though the paint has faded, what it says is “PATRICK McDEVITT DIED 1928 AGE (2)”. This made me remember that my father had had a brother called Paddy who died in babyhood. He was born in 1927. The bracketed age would be slightly out if he died in 1928; he would still only have been one year old. However, as the name is rare anyway, and not many Patrick McDevitts could have died in childhood at that time, it’s still a serious possibility that this is the grave of my uncle. It’s a mystery though. Who erected the cross? Why was the grave unmarked? Is the information correct? Is he really buried there?

I have subsequently emailed Fr Patrick McGonagle, the curate of the parish. He replied: “The only record I can find here is a Patrick Gerard McDevitt born 23 July 1927. His parents were Joseph McDevitt and Kathleen McCauley. I cannot find any record of burial for anyone McDevitt between 1927 and 1930.” They are my grandparents. (I met my grandmother a few times as a child, but never my grandfather). They moved on from Buncrana and the growing family grew up in Monaghan.

It was all thirsty work. A drink at O’Dohertys was well-earned.

On the way back to Dublin, the bus stopped at Lifford. This was the town where my ancestor Phelim Reagh McDevitt was executed by the British in 1608 for his part in the Derry Rebellion. They didn’t use this contraption, thankfully. He was hung. McDevitts were about 13% of the rebel army, but the name appears often in the 1609 Pardon List. 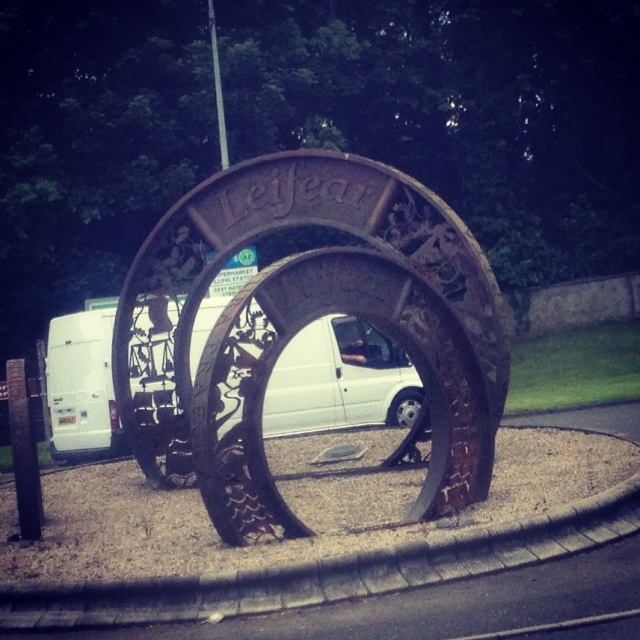 In Dublin, I drank at the two most appropriate pubs. McDaids is the most famous literary pub in Ireland, a beautiful small decorated shack where Patrick Kavanagh held court and many writers came to meet him, including my own favourite Michael Hartnett. 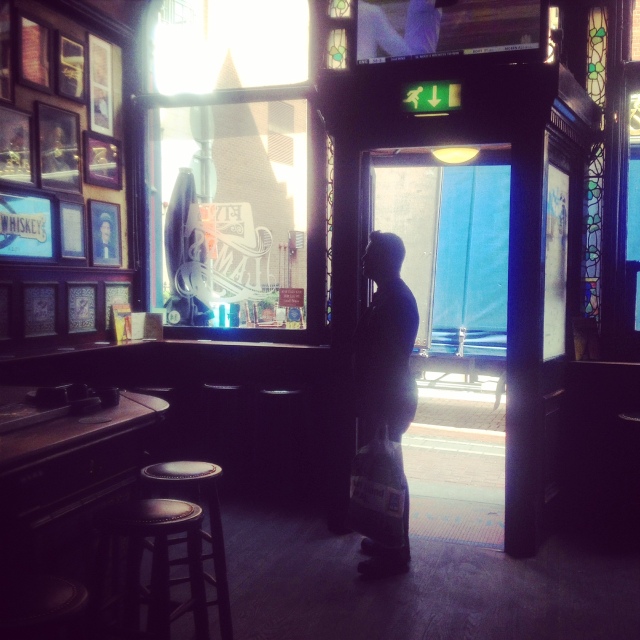 N.B. Huge thanks to Julie for accompanying me to Ireland on this challenging mission and for taking such wonderful photographs. Here’s one I took of Julie at the entrance to Trinity College Dublin with her famous namesake in the background.

I also owe a huge thanks to an American clansman, Matthew McDavitt, who is an expert in McDevitt lore and has compiled this excellent Pinterest site:

Thanks, lastly, to my mother Frances.